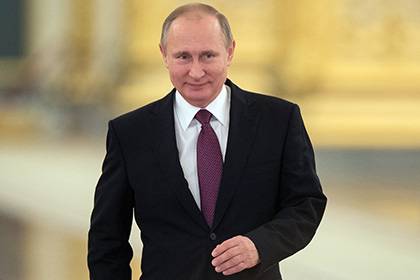 Almost every second Russian believes the politician of the year President Vladimir Putin. This conclusion follows from the sociological poll spent by Fund “Public opinion” (FOM).

Answering the question of who from the Russian politicians and public figures, you can assign the title of “man of the year,” 43 percent of citizens called Putin. In addition, respondents said foreign Minister Sergei Lavrov (9 per cent), LDPR leader Vladimir Zhirinovsky (7%) and defense Minister Sergei Shoigu (5 percent). With more than a quarter — 27 percent — were undecided.

The vast majority of Russians (81 per cent) were unable to determine which of the events that occurred in the country in the current year, may claim the title “event of the year”. Some respondents recalled the state Duma elections (6 percent), the construction of Crimean bridge and opening the bridge to the Peninsula (2 percent).

Meanwhile, 29 percent of citizens believe “the event of the year in the world,” the U.S. presidential election and the victory of Republican Donald trump, 18 percent of the events in Syria. 42 percent of survey participants could not answer this question.

December 7 edition of the American magazine Time awarded the status of person of the year Donald Trump.