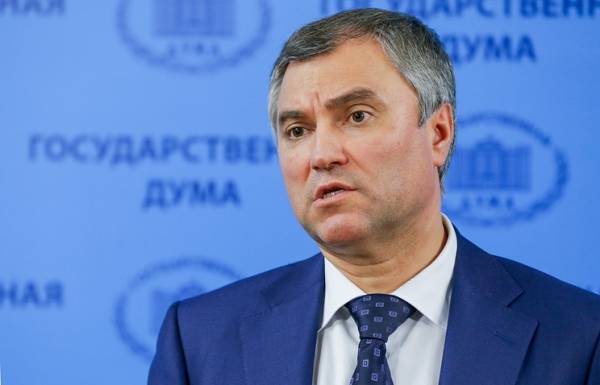 ASTANA, 12 December. /TASS/. Chairman of the state Duma Vyacheslav Volodin, during his first official foreign visit as the head of the lower house of the Russian Parliament will meet on December 12 in Astana with President of Kazakhstan Nursultan Nazarbayev. The focus of negotiations to further strengthen cooperation between the two countries in various fields, including in the transport sector.

During the visit, the speaker also scheduled a meeting with the heads of both chambers of Parliament – the Majilis speaker of the Republic of Nurlan Nigmatulin and Chairman of the Senate Kassym-Jomart Tokayev. “The parties intend to discuss further development of bilateral intergovernmental and inter-parliamentary relations”, – told reporters in the management of public relations and interaction with mass media of the state Duma.

Cooperation in the field of transport

In the Russian delegation to Astana there arrived also the head of the Duma Committee on transport and construction Yevgeny Moskvichev. The MP foresees the “interesting” talks in the capital of the Central Asian Republic. According to him, during today’s meetings will discuss issues of development of transport infrastructure, including large-scale project “silk road”.