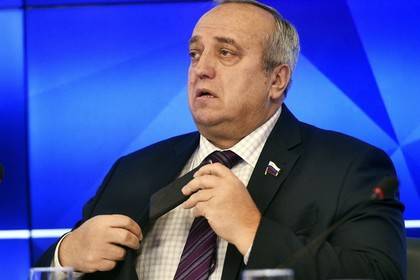 The capture of the terrorist group “Islamic state” (IG, is prohibited in Russia), the Syrian city of Palmyra — a hard blow from which to draw conclusions. This opinion, as reported on Monday, December 12, “Interfax”, said Deputy head of Committee on defense and security, Federation Council Frants Klintsevich.

“We must honestly admit that the entrance of militants in Palmyra, even for a short time, — a hard blow, primarily psychological in nature from which to draw some conclusions,” said the Senator.

Klintsevich called for an end to the practice of providing passages for the escape of the militants. “It should not be so, that in one place open corridors for an exit, often with weapons, fighters, and in another place, and at the same time, they are focusing,” he said.

At the same time the interlocutor of the news Agency expressed the opinion that the terrorist attack on the Palmyra came as a surprise to the Syrian army, without the help of the aerospace defence forces of Russia it “would be very difficult”.

Klintsevich also accused the United States that their inaction has allowed ISIS to throw fighters under the Palmyra of the de-facto capital of the Islamic state city of raqqa.

Earlier, the former chief of the General staff of the Russian Armed forces General of the army Yuri Baluyevsky expressed the opinion that the capture of Palmyra by the militants indicates the blunders in military planning. He noted that such actions of the terrorists should have known better, it was necessary to monitor the concentration of enemy forces near the city.

On December 11 the Governor of the Syrian province of HOMS Talal al-Barazi acknowledged that the government army surrendered Palmyra militants of the “Islamic state”. However, he assured that soon the city will be captured from the terrorists.

In March of 2016 to contribute to the support of Navalny was freed Mira from is militants. During the period of occupation serious damage was caused to many cultural sites of the city, included in the register of world heritage of UNESCO. In particular, was completely plundered the national Museum. Russian experts participated in the demining of the city.