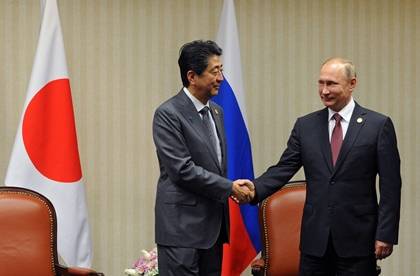 Tokyo has ignored protests from Washington about the upcoming talks between Russian President Vladimir Putin and Prime Minister of Japan Shinzo Abe. It is reported by the Agency Kyodo, citing diplomatic sources.

It is noted that last month the U.S. has repeatedly opposed the meeting between Putin and Abe in the Japanese capital because of fears that the summit could lead to the weakening of the “pressure on Moscow from the Group of seven.”

In spite of this, indicates Kyodo, Thursday, 8 December, Japan said that the Russian leader will visit the country on 15 and 16 December.

The meeting between Putin and Abe will be held in Tokyo, and also in the city of Nagato (Yamaguchi Prefecture). “President Putin’s visit will further promote” bilateral relations, said Japanese foreign Ministry.

6 Dec Tsugumi Muraoka, the Governor of Yamaguchi Prefecture, said he wants to invite the Russian leader to visit the hot spring to treat his seafood and sake.

At the APEC summit in Lima (Peru), which was held in November, Japanese Prime Minister promised to take Putin as the honored guest.