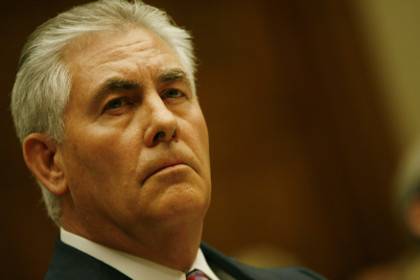 Director of ExxonMobil Corporation, Rex Tillerson, who is considered the main contender for the post of U.S. Secretary of state in a future administration, told President-elect, Donald Trump, that it will be a great honor to lead the state Department. About it reports CNN with reference to the sources.

It is anticipated that trump will announce his choice in the middle of next week.

“It is much more than a business Manager. He’s a world class player. He says, I think, the biggest company in the world,” Tillerson described the President-elect. According to him, the head of ExxonMobil — the fact that he knows many of the world’s top players.

“He makes a very big deal in Russia, he concludes large transactions. For the company, not for themselves, for the company,” added trump.

While MITT Romney is still seen as the state Secretary, this trump calls the future head of the White house, the Raines Pribus.

As noted, the candidate Tillerson raises concerns among some members of the establishment due to a possible change of course and its relations with the Russian leadership. In particular, Senator John McCain said he wants to hear Tillerson answers to questions before you make conclusions. Senator, in particular, mentioned the relationship of the head of ExxonMobil with Russian President Vladimir Putin, and allegedly performed Russian HQs air strikes on hospitals in Syria.

That Tillerson has become the main contender for the post of Secretary of state, on Friday, December 9, wrote the newspaper the Wall Street Journal, citing two officials on the transition team.

In 2011, Tillerson held talks with Russia on energy partnership, and in 2012 was awarded the Russian Order of friendship. The post the top Manager of Exxon, he opposed sanctions against Russia.

In addition to Tillerson and Romney, candidates for the post of Secretary of state are former CIA Director David Petraeus, Chairman of the Senate foreign Affairs Committee Bob Corker and former U.S. Ambassador to the UN John Bolton.

Trump had previously decided on candidates for key positions in his administration. The attorney General will be the Senator from Alabama Jeff sessions, the Director of the CIA offered to the Congressman from Kansas, Mike Pompeo. The Pentagon will be headed by a retired General of the marine Corps James Mattis.

The U.S. presidential election held November 8, was won by the Republican candidate Donald trump. He will officially take office after the inauguration on January 20, 2017.