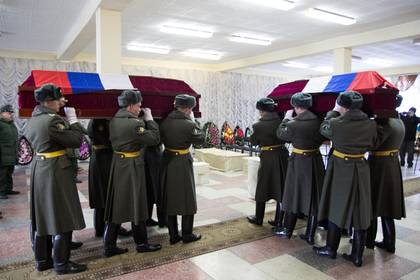 In Birobidzhan was buried two nurses who were killed in the shelling of the Russian mobile hospital in Aleppo, Syria. As reported TASS, the commander of the Eastern military district (TSB) Colonel General Sergey Surovikin has presented state awards to relatives Galina Mikhailova and Hope Durachenko.

“For courage, bravery and dedication shown during the performance of military duty, Sergeant Hope Durachenko and Sergeant Galina Mihaylova awarded the order of Courage, posthumously”, — said the press service of BBO. The corresponding decree the President of Russia Vladimir Putin signed on December 8.

The Governor of the Jewish Autonomous oblast (jao) Alexander Levintal, in turn, said that the memory of the inhabitants of Birobidzhan killed in Syria, will be immortalized. He added that the family will be provided with financial aid. “All necessary payments that rely of Federal and regional budgets, non-recurring and monthly, documents are prepared, everything will be done quickly, and the process we will follow,” said he.

The ceremony of farewell with the doctors began the evening of 9 December in a military unit. 10 December was held the funeral service in the Cathedral. After this the procession went to the cemetery where he was buried Galina Mikhailova and Hope Durachenko. According to the representative of the mayoralty of Birobidzhan, in the ceremonies was attended by no less than a thousand people, reports RIA Novosti.

On 5 December, the official representative of the Ministry of defense of Russia Igor Konashenkov said that the militants attacked a mobile military hospital in Aleppo, when there was carried out the reception of the population. Two women died-the physician, another pediatrician was wounded. Also injured came to the examination by local residents.