As it became known””, the Commission investigating the fall of the su-33 from the deck of the aircraft carrier “Admiral Kuznetsov” in the Mediterranean, decided on the main version of the incident. According to preliminary data, breakage of a cable of the arresting gear occurred due to pilot error: the experts are inclined to believe that the pilot exceeded maximum allowable deviation of the axis of the landing, thus creating excessive stress on the cable. According to “Kommersant”, the incident resulted in lost machine with the hull number 67 red. 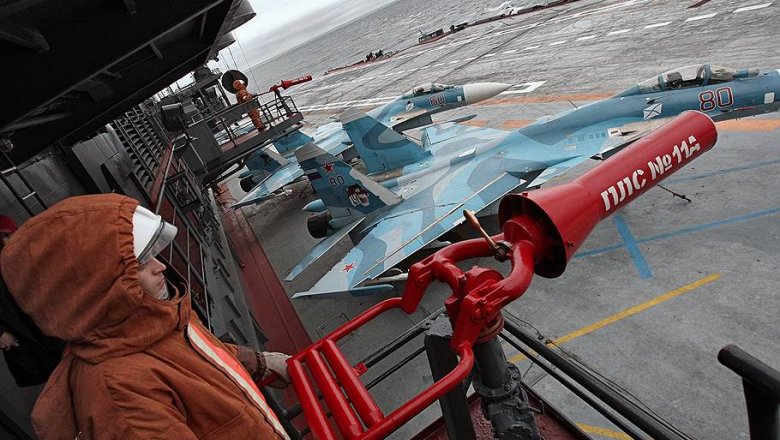 On preliminary conclusions of the emergency Commission investigating the loss of 3 December the ship’s fighter su-33, “b” told the sources close to the Main headquarters of the Navy, and the top Manager of the enterprise aviation industry.

They argue that the results of studying of materials of objective control allowed them to recreate the overall picture of the incident.

The day fighter of the 279-th separate naval fighter aviation regiment (hull number 67 red), part of the air group “Admiral Kuznetsov” was carrying out a combat mission in Syria, after which he decided to return aboard the cruiser.

The flight conditions were evaluated as good: pleasant, line of sight up to 10 km and the wind over 12 knots. The interlocutor of “Kommersant”, involved in the investigation, says that at first everything went normally: the head of operations, who was at the control tower of the ship, gave the pilot permission to land, and the latter started to perform the maneuver.

The fighter hooked the cable hook-hook and started to reduce the engine speed. He traveled about 50 meters, and then the cable snapped, and instead of stopping on the deck, su-33 continued.

To turn on the afterburners and attempt the call on the second round of the pilot have not had time. After a few seconds, the flight Director gave the pilot the command to eject, which he immediately did. The plane fell from the deck into the sea.

The incident was immediately reported to the senior leadership of the defense Ministry, which instructed promptly to determine the cause and to develop measures to prevent such incidents.

Hot on the heels of selected few versions, but now, according to sources, “b”, many of the hypotheses are excluded.

For example, first put forward the assumption about the speeding fighter at the time of landing the members of the emergency Commission confirm not found (su-33 landed on the permissible speed 240 km/h).

su-33 crashed while landing on the aircraft carrier “Admiral Kuznetsov”

According to interlocutors, “b”, as the main causes of accident the Commission of the Ministry of defence considers the human factors experts found that the deviation of the axis of landing fighter was exceeded by almost two feet from the maximum allowable (4.7 m instead of 4.2 m).

Breakage of the cable might occur because of the marriage, admitted in manufacturing, however, reject this version on Proletarsky plant (part of United shipbuilding Corporation), which produces an arresting gear landing of the complex “Svetlana-2”: their representative says that the cables installed on the “Admiral Kuznetsov”, passed the whole complete cycle of tests, including gap.

“It is important to understand the sequence of either the wire has not sustained loading from-for mistakes made while landing, or the cable snapped, which led to the accident,” — said the interlocutor of Kommersant, close to the investigation.

But judging by the parameters of the aircraft at the moment of landing, even a fully intact rope the load would not have survived — there is a piloting error.the source of “Kommersant”

The official representative of the defense Ministry yesterday from reviews, “b” refused, promising to provide them immediately upon completion of the work of the Commission.

Recall that in the last month, “Admiral Kuznetsov” has already lost two fighters (about the loss of MiG-29K “Kommersant” wrote on 15 November). The loss of the su-33 are especially difficult, says the Kommersant source in the aviation industry, as the production of heavy naval fighter stopped and only hope for their modernization and repair.

Drowned su-33 would be repaired at the aircraft factory in Komsomolsk-on-Amur recently in 2012-2013, after which operated in 859th center for combat application and training of flight crews of naval aviation of the Russian Navy and the 279th separate naval fighter air regiment.