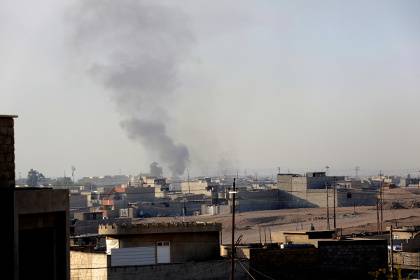 The U.S.-led coalition bombed a hospital in Mosul, which was used by militants of the “Islamic state”. This was reported at the command of the operation “Unwavering commitment”.

On Tuesday, December 6, Iraqi security forces attempted to occupy the hospital complex of al-Salem in the East of Mosul where the militants of the IG. The terrorists used the hospital as their base and headquarters. After the Iraqis took the area, they managed to repel several counterattacks, and strengthen their positions.

The next day, December 7, Iraqi units during the battle with the terrorists and bombarded their positions from heavy machine guns and grenade launchers, requested coalition air support. The aircraft struck a surgical strike on a place of a congestion of fighters.

“The coalition respects the rules of conduct of armed conflicts and shall take all possible precaution in the planning and implementation of air strikes to reduce the risk of harm of non-combatants and persons”, — stated in a press release.

Mosul more than two years under the control of the IG. Ground military operation to liberate the city began on 17 October this year. It involved units of the regular Iraqi army, the Kurdish militia and formation of volunteers. The international coalition led by the USA supported the attack from the air and provides artillery support.

The total number of attacking troops the city is about 100 thousand people. According to US intelligence, resistance to them can have about five thousand fighters.

“Islamic state” made in Russia in the list of terrorist organizations, participation in activities which is punishable under criminal law.