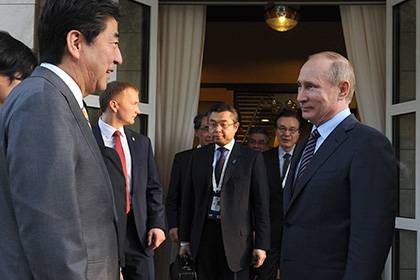 The Japanese foreign Ministry announced the visit of Russian President Vladimir Putin. This was reported on the website of the Ministry of foreign Affairs of Japan.

As stated in the document, the Russian leader will visit the country on 15 and 16 December this year. Talks with the head of the Japanese Cabinet Shinzo Abe will be held in Tokyo and in the city of Nagato (Yamaguchi Prefecture).

“President Putin’s visit will contribute to further promotion of relations between Japan and Russia,” said a Japanese foreign Ministry.

On December 6 the Governor of the southwestern Japanese Prefecture of Yamaguchi Prefecture Muraoka Tsugumi admitted that he wants to invite Russian President Vladimir Putin to visit the hot spring to treat his seafood and sake. “This is a very joyous event, we perceive it as a great honor — said Muraoka. Is the native place of Prime Minister Shinzo Abe, we are doing everything to prepare for the fact that the leaders of the two countries in a calm and quiet environment to concentrate there on their negotiations.”

In the previous meeting between Putin and Abe, which took place at the APEC summit in Lima (Peru) in November this year, Japanese Prime Minister promised to take the Russian President as the honored guest: “in a traditional Japanese hotel with hot spring”. “And the next day we moved to Tokyo and discuss economic issues,” — said the Prime Minister.