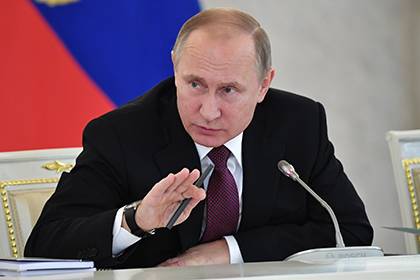 Moscow could not accept the position of Western institutions in relation to the death of Russian military physicians in Syria. This statement was made by President of Russia Vladimir Putin at a meeting of the Council for development of civil society and human rights, the correspondent “reports Tapes.ru” on Thursday, December 8.

According to the head of the state, “a major international structure (…) just put on the same footing and deceased of our physicians, and those who attacked the hospital, and made it clearly consciously knowing where a medical facility.”

He stressed that “it is absolutely unacceptable and inadmissible”.

Putin recalled that the doctors arrived in the Arab Republic “not to take part in the hostilities, and to provide assistance to people and local population.”

The President thanked the Russian Red Cross, who strongly condemned the murder of employees of the Russian mobile hospital in Aleppo.

Earlier Thursday, the Russian leader signed a decree on awarding the order of Courage posthumously sergeants Hope Durachenko and Galina Mikhailov. In addition, the order was received by the Professor of Military medical Academy named after Kirov Vadim Arsentyev, seriously wounded during shelling in Aleppo.