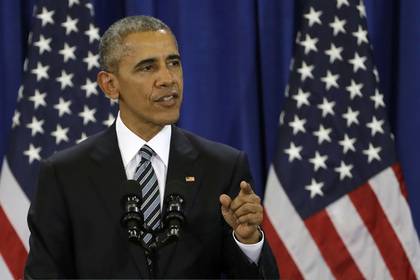 The mistakes the United States during the military operation in Iraq, became one of the reasons for the emergence of the international terrorist organization “Islamic state” (IG, former IGIL, is prohibited in Russia). On Tuesday, December 6, said the American leader Barack Obama on the American air force in Florida. Video of his speech posted on the White house website.

“We refused to repeat some of the mistakes of the 2003 invasion, which initially contributed to the growth of the organization, which became known as ISIL,” Obama said. In 2014, he recalled, the United States created the coalition, which includes about 70 countries, and began to fight with terrorists in Syria and Iraq, but not American forces battalions, and local groups that Washington supported with equipment and special forces.

The American leader stressed that the coalition has inflicted on the terrorists more than 16 thousand air strikes, and ISIS has lost more than half its controlled territory. “Ultimately, the backbone of the IG will be broken,” said Obama. However, he acknowledged that the fight against extremism in the middle East may last for several generations.

Extremist group “Islamic state” in the summer of 2014 seized part of the territories of Syria and Iraq and declared a Caliphate there. Military operations against ISIS carried out the armed forces of several countries, including the Russian VKS.