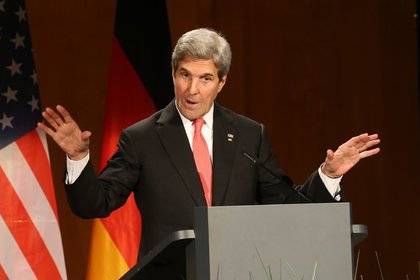 U.S. Secretary of state John Kerry spoke about how at a young age in the mid-1950s years traveling through East Germany met Soviet soldiers. His speech in Berlin at the ceremony of awarding him the order “For merits before Federal Republic of Germany” published on the website of the US state Department.

According to Kerry, at the age of 12 without supervision of parents sent him from Frankfurt to West Berlin in the military echelon, which had to cross GDR territory. “We were not allowed to raise the blinds, but I still did it. I had six cans of Pepsi-Cola and a few comics that I bought in Frankfurt. And I didn’t sleep all night because I was curious, I looked out the window. When we stayed at the stations, the soldiers — they were Russian soldiers, the Soviet soldiers went back and forth and watched that no one got off the train. And one lightly tapped the butt of my window, so I drew the blinds because I could not see the place where I was”, — said the state Secretary.

Kerry also re-told how during his stay in West Berlin, decided to go by bike in the Eastern part of the city, which was part of the GDR. He admitted that this trip was unforgettable. “I was a little scared. I felt this sinister darkness, this gray color. Very few cars, few people, less fuss, than in the Western part [of Berlin],” said the Secretary of state. According to him, the grim situation is so affected him that he decided to return to the American sector of Berlin.

The head of state expressed the opinion that his father, who served as a diplomat, was delighted to visit of son in East Berlin turned into an international incident.