The inhabitants of the Republic Khakassia are actively discussed in social networks the fall of the meteorite, which occurred in the Republic on the evening of 6 December. According to users, the fall of a space object was accompanied by a roar and a bright flash.

“It’s incredibly beautiful and terrifying sight! And what an explosion came… In such moments you wonder whether you’re living,” wrote one of the wearer of the social network Vkontakte.

According to a resident of Sayanogorsk Matthew, quoted by TASS, the people fearing the fall of the meteorite. 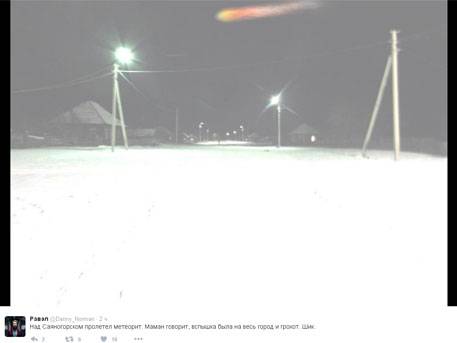 “He was yellow and rear blue glowed and disappeared abruptly. When I approached the building a strong roar was, very!”, – said Matthew.

Schoolgirl Anastasia Sayanogorsk claims that at the time of the fall of the meteorite “staggered walls”.

“First we saw the sky flashed, then a crash shook the walls. It was like an earthquake, and our teacher said to leave school and go to all home,” she said.

Space object fell, presumably, in Beysky district, Khakassia Republic, in the valley of Babik near Sayanogorsk. Economically important objects in the result of a meteorite has not suffered. To the place of falling of a meteorite specialists left.