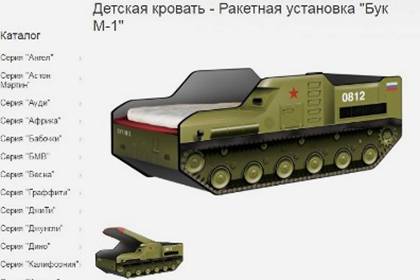 The St. Petersburg factory Carobus after the scandal ceased production cots in the form of installation of the complex “Buk”. About it to “Radio Baltika” said Director Anton Koppel.

“We understand that it is not necessary to popularize the topic of baby arms and turn this initiative as I do not presume to decide for others what is good and what is bad. Although after the scandal of positive reviews on Cribs “Buki” had a more than negative, we decided not to unnecessarily disturb a society that is not ready for that,” said Koppel. According to him, this model can be ordered in a special manner.

The Director added that “the beeches” was no more than five percent of all orders.

In October, about the unusual piece of furniture in Facebook said the journalist Oleg Kashin. Then Director of a furniture company explained that a special line of cots in the form of tanks, aircraft and rocket launchers were issued to 71-th anniversary of Victory.