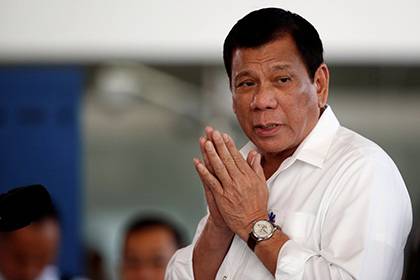 Philippine President Rodrigo Duterte may visit Moscow in the spring of 2017. This was stated by the foreign Minister of this country Perfecto of Yasai during a visit to the Russian capital, his words “Interfax”.

“I came here to confirm the agreements that were reached in the framework of a bilateral meeting between our presidents in Lima, Peru. During the meeting, President Putin invited the President of Duterte to visit next year. I hope it happens in April, March or even may,” said Yasai.

His Russian counterpart Sergei Lavrov, in turn, expressed the hope that it will be possible to discuss all the issues raised at the bilateral meeting of presidents in Lima, as well as cooperation in the international arena.

28 November Duterte complained to Russian President Vladimir Putin on the Russian cold: “President Putin during our meeting said, “we are Waiting for You in Russia.” To which I replied: “thank you very much, Mr. President, but I can’t right now because I can’t stand the cold.” If I were in Russia now, he would have died on the spot, I guess,” he told Philippine leader.

Putin and Duterte held talks on November 19. The Philippine leader said wrong policies of Western countries who “are trying to attack small countries and bully them.” Putin, in his turn, congratulated his colleague with his victory in the presidential elections held in may.

Duterte repeatedly made harsh statements. In particular, he called Barack Obama a son of a whore, UN Secretary-General ban Ki-moon dubbed a fool, and sent to hell with the European Union.