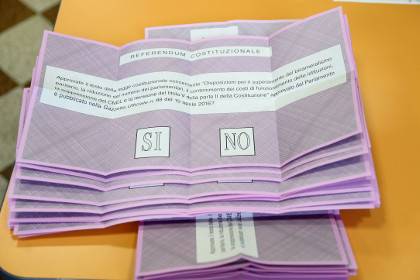 Continued: Renzi announced his resignation from the post of Prime Minister of Italy

The initiative of the government of Italy concerning amendments to the Constitution were rejected by the population — evidenced by the results of an exit poll, reports Reuters.

According to research performed by the Piepoli Institute / IPR commissioned by the state broadcaster RAI, the reform project was supported by 42-46%, whereas a negative answer was given by 54-58%.

Earlier, Prime Minister Matteo Renzi has said he will resign if the Italians will reject his plan of constitutional reform. For the immediate resignation of the Prime Minister called on the leader of the opposition party “Northern League” Matteo Salvini, RIA Novosti reported.

“If these data are confirmed, it will be a big victory for the citizens, and Renzi will have to resign in the next few minutes, to immediately hold elections,” — said Salvini at a specially convened press conference.

The opposition leader thanked the Italian people for the manifestation of his position and the high turnout, noting that the victory of the “no” answer in the referendum is not only a loss of Rienzi, but “all of his lackeys.” “We will be ready to provide alternative government for all those who will be ready to go to vote,” said the leader of “Northern League”.

The Central government of Italy has taken the initiative to reduce the role of the upper house of Parliament, the Senate, as well as pick up some of the powers of the regional authorities.