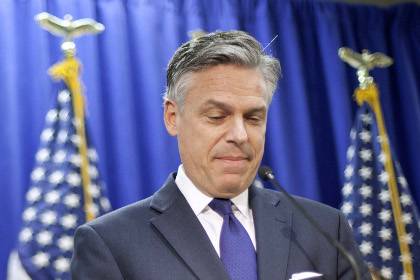 Among the possible contenders for the post of Secretary of state in the administration of President-elect Donald trump entered the former Governor of Utah, Republican Jon huntsman. This writes The Salt Lake Tribune.

According to two people close to the transitional administration, trump has expanded the list, first of which consisted of former new York mayor Rudolph Giuliani and former candidate for the US presidency from the Republican party MITT Romney.

Among others, consider the candidature of Hatsman and former CIA Director David Petraeus.

It is known that the huntsman previously served as Ambassador to China and fluent in Chinese language.

On 18 November it became known that trump has decided on candidates for key positions in his administration. So, the attorney General will be the Senator from Alabama Jeff and Roman sessions, the Director of the CIA offered to the Congressman from Kansas, Mike Pompeo.

The question is, whether the posts of state Secretary and Minister of defence. Earlier media reported that the state Department can be headed by Romney, Giuliani, Governor of South Carolina Nikki Haley, former US Ambassador to the UN John Bolton.

1 Dec trump has promised that the Pentagon will be headed by a retired General of the marine Corps James Mattis.

Presidential elections in the United States were held on 8 November, was won by the candidate of the Republican party, Donald trump. He will officially take office after the inauguration on January 20, 2017.