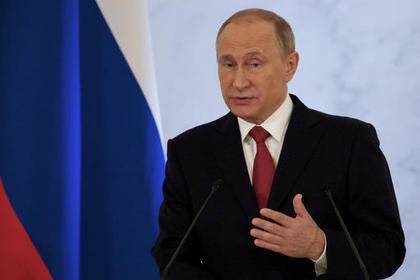 Attempts to create a unipolar world was not successful, so now the world balance of power is gradually being restored. This opinion in the program “week” on NTV, said President of Russia Vladimir Putin.

“And I think, for anybody not a secret, everyone can see that already many of our partners prefer to refer to principles of international law, because the balance is gradually restored. Well, it’s inevitable!” — quotes the President “Interfax”.

According to Putin, Russia has always considered necessary with respect to the interests of other countries, protecting their national interests. “So we’re going to build our relations with all our other colleagues,” — said the Russian leader.

On 30 November, the President signed a decree that approved the new concept of Russian foreign policy. Foreign policy activity of the state, says the concept is aimed at “providing the country’s security, its sovereignty and territorial integrity, strengthening the rule of law and democratic institutions”, as well as to strengthen Russia’s position “as one of the influential centers of the modern world”.

In addition, Russia will protect the interests of its citizens living abroad compatriots to consolidate the Russian Diaspora, to spread and strengthen in the world the role of the Russian language, to popularize the achievements of national culture and historical heritage.