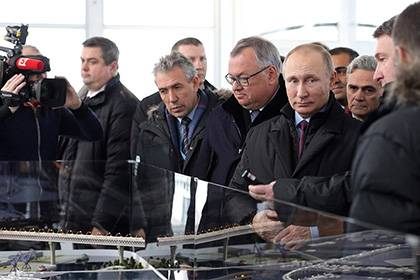 Russian President Vladimir Putin said goodbye to the contractors for the construction of the Central section of the paid highway “the Western high-speed diameter” (ZSD) in St.-Petersburg in the Italian language. It is reported REN TV Friday, December 2.

According to TV channel, after the official opening ceremony section of the main Putin shook hands with the workers and said, “Arrivederci”.

The head of state at the event invited the foreign companies involved in the construction of the road, to work on other projects in Russia.

Earlier Friday it was reported that the opening of the highway were invited to the crane operator Tamara Pastukhov, who saved three people during a fire at the construction site of WHSD. She promised not to wash the hand that shook Putin.

ZSD — intercity multilane highway connecting the southern and Northern districts of St. Petersburg to bypass the center. It will allow you to drive around the metropolis in about 20 minutes. For the construction of three sections of the diameter of the Central, southern and Northern — it is planned to spend more than 200 billion rubles, of which half of investors ‘ funds, said TASS.