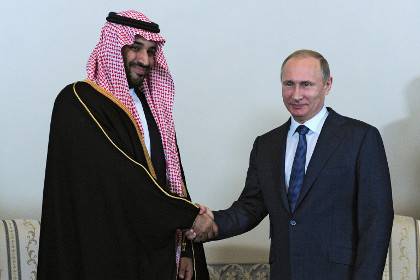 Russian President Vladimir Putin played a crucial role in regional rivals Iran and Saudi Arabia have agreed in the framework of the General agreement of OPEC to reduce oil production. About it reports Reuters, citing a number of sources both in the cartel and outside it.

The Agency, in particular, has learned that Putin is successor to the Saudi crown Prince Mohammed bin Salman and Iran’s Supreme leader Ali Khamenei tried to find an agreement before the OPEC meeting on Wednesday, November 30. The Russian leader acted as a facilitator.

According to the Agency, this suggests that Russia’s influence in the middle East increased from the moment when she decided to intervene in the Syrian conflict.

In September Putin on the sidelines of the G20 meeting in China, met with Prince Mohammed. They both agreed to cooperate to help the global oil markets to move away from explicit congestion. The deal became possible on the background common interests, associated with a reduction in government spending due to falling oil prices, despite disagreement on Syria.

The latest meeting of OPEC, however, was unsuccessful because of a dispute between the de facto leader of the cartel, Saudi Arabia and the third largest producer, Iran. Tehran has long argued that OPEC should not interfere with his desire to restore the pre-sanctions production levels. The tension between the Sunni Kingdom and the Shiite Islamic Republic and contributed to the proxy war in Syria and Yemen. Against this background, the agreement is problematic, and the oil markets went in the opposite direction.

As reported, Putin came to the conclusion that Saudi Arabia will be ready to take the “lion’s share” of the total reduction of oil production, if it doesn’t look “too great a concession” to Iran and that Tehran “will not celebrate the victory over the Saudis”. November 28, Putin and Iranian President Hassan Rouhani held a telephone conversation. Ayatollah Khamenei taking a final decision on the position of Tehran, said that Iran should not give in to political pressure and agree in Vienna on any production cuts.

Wednesday, November 30, the Saudis agreed to cut production to a greater extent, while Iran was allowed some to increase. After the meeting, as noted, usually bellicose Minister of oil of Iran Bijan Zanganeh avoided any comments that could be construed as a Declaration of the victory over Riyadh. “We were solid, he said. — Telephone conversation between Rouhani and Putin played a major role.” According to the Minister, after calling Russia supported this change quotas.