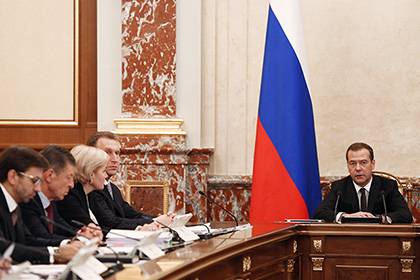 Prime Minister Dmitry Medvedev expects from the government a responsible approach to the implementation of the tasks of the President’s address to the Federal Assembly. He stated this at the Cabinet meeting on Thursday, December 1, reports “Interfax”.

“I am confident that every one present — I mean the leadership of the government, Ministers, heads of agencies, services — heard of where to focus next year. So that you can begin to work through these issues already immediately,” — said Medvedev.

He added that the list of instructions following messages will be formulated in the near future.

In his opinion, the economic situation in the country is not the easiest. At the same time in a number of areas have been positive trends that need to “fully consolidate, develop” in accordance with the purposes stated in the message. “Obviously, this requires strict discipline, and the dynamic work of the government itself, and active interaction with other branches of government. Expect members of the government in the most efficient and responsible approach to the implementation of these objectives,” he said.

The message of the President of Russia Vladimir Putin to the Federal Assembly were made earlier Thursday. He, in particular, promised the citizens to pursue changes in the social sphere, “to become closer to people, to their needs, were more modern and fair.” He also noted that Russia will focus on the development of a democratic political system.

In addition, Putin urged officials to engage in open and honest dialogue with the citizens instead of hiding in the offices.