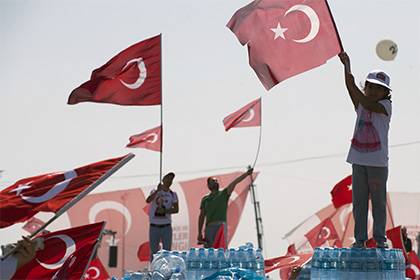 The leaders of the Turkish governing party of justice and development party (AKP) Binali Yildirim and the opposition nationalist movement Party (MHP) Devlet Bahceli agreed on the draft of the new Constitution. About it reports NTV.

Now the draft basic law will be submitted for consideration to the Parliament. According to Yildirim, if the document is approved more than 330 deputies, it will be put to a referendum. The vote must take place no later than 60 days after the project is approved by the legislature.

The draft of the new Constitution provides for a sharp increase in the powers of the President. In particular, the head of state will be able to lead the Cabinet of Ministers, or to single-handedly appoint the Prime Minister.

In addition, in the case of the adoption of the document in direct subordination of the head of state will pass the country’s armed forces and intelligence agencies. Currently they are governed by a collegiate body — the Supreme military Council.

Another important innovation may be the return of the death penalty. On 1 November this year, the head of the Cabinet of Ministers of Turkey, Yildirim said that if the political parties can reach a compromise on this issue, and the solution will coincide with the desire of the nation, can be developed accordingly. “Then we will make suggestions to the draft of the Constitution,” he said, speaking in Parliament.

According to Reuters, the referendum on the draft new Constitution can pass in the summer of 2017.