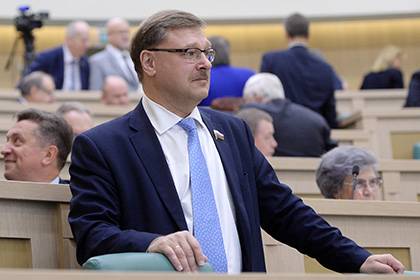 A new foreign policy Concept signed by President Vladimir Putin on 1 December, is not confrontational. The Chairman of the Federation Council Committee on international Affairs Konstantin Kosachev wrote in his blog on the website of the upper house of Parliament.

Kosachev described the document as “Concept of continuity” and noted that it requires a deep understanding. According to the Senator, the Concept reflects the dramatic changes in world politics over the last three years, the Ukrainian crisis, the rise of international terrorism, the aggravation of the North Korean nuclear issue, the immigration crisis in Europe.

The Senator was particularly marked in the document the idea of promoting Russian interests with “soft power”, in particular, the Russian media in the global information space and civil society.

“The concept doesn’t look confrontational towards anyone — on the contrary, the willingness to cooperate is confirmed in relation to any of the subjects of international policy, including those that have imposed sanctions against our country, — says the Senator. — Of course, an important point, because, I think, many expected a more accentuated division of the world into friends and enemies. But this is a highly pragmatic document aimed at improving, not worsening of the international situation”.

The text of the new Concept on Thursday, December 1, was published on the website of legal information. The document came into force from the day of its signing, i.e. on 30 November.