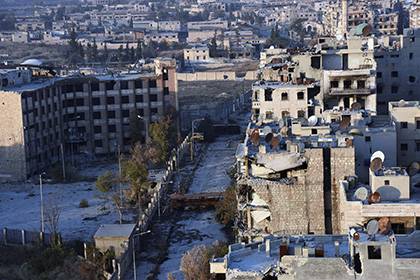 Evaluation of the UN mission arrived in the liberated from the militants in the neighborhoods of Aleppo. It is reported RIA Novosti with reference to the statement of the official representative of the UN Secretary General Stefan Dujarric.

The first mission, composed of representatives of various humanitarian agencies of the UN, is now in the districts of Eastern Aleppo, captured from the insurgents by the government troops. Other works displaced from the liberated districts of people, assessing their needs and developing plans for the delivery of necessary assistance. According to Dujarric, at the moment all refugees from East Aleppo, the Syrian Arab Red Crescent has provided shelter, food, and medical care. According to the UN, in the occupied areas still remain about 250 thousand people.

In recent days, Syrian government troops liberated from the terrorists more than 40 percent of Eastern Aleppo with 80 thousand inhabitants. More than five thousand people gathered in safe areas of the city from terrorists controlled the southern districts of Eastern Aleppo.

The operation to liberate Eastern Aleppo from militants began 21 Nov. Government troops and militia with the support of the Palestinian brigade “Liwa al-Quds” for three days broke the defense of the armed opposition and freed a quarter of Masakin-Khan — one of the key points of the positions of militants in the city. In this area the government troops were confronted by members of the armed coalition “Jaish al-Fath” (also includes militants of the banned in Russia terroristicheskoj organization “Dzhabhat EN-Nusra”).