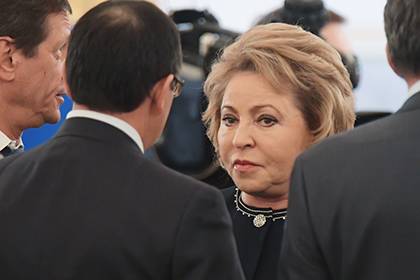 The Federation Council will plan for legislative provision of the instructions contained in the message of the President of Russia Vladimir Putin. On Thursday, December 1, was announced by the speaker of the upper chamber of Parliament Valentina Matvienko. The Senator noted that a large part of the President’s speech was devoted to the domestic political agenda, reports the national news service (NSN).

“While we slowly solved the problems of structural changes in the economy, remove barriers to business. I completely agree that banks should increase lending to small and medium business, individual entrepreneurs,” — said Matvienko.

The Chairman of the Federation Council Committee on rules and organization of parliamentary activity Vadim Tulpanov, in turn, called the President “message for the future.” In his opinion, all what he was talking about the head of state earlier, is performed. And current address — should be the starting point for 2017, write dni.ru.

Putin delivered a message to Parliament earlier on Thursday. In particular, he urged to reduce the fiscal burden on business and praised the Central Bank for clearing in the banking sector. According to kp.ru President’s speech was interrupted by applause 12 times. The President read a message within 69 minutes.