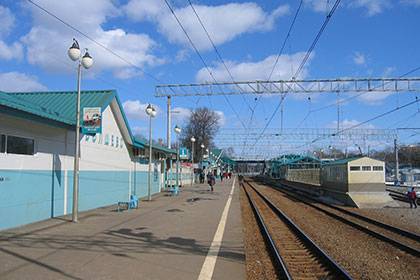 The movement of trains is suspended in the suburbs because of the accident at the station Bolshevo — Green Bor Yaroslavl direction. On Thursday, November 3, reported on the website of the Moscow railway (MZHD).

Trains from Moscow drive to bolszewo and return to capital. Trains from Fryazino, do not go on the station Green forest and turn back.

The accident occurred at about 6:20. The truck driver broke the rules and left on railroad tracks, despite forbidding sound and light signals. The driver of the train Moscow — Bolshevo urgently braked, but the collision could not be avoided.

“According to preliminary information, the locomotive crew was not injured, the passengers on the commuter train for medical help did not apply, the driver of the car also didn’t suffer”, — stated in the message of the Moscow railway.

In September as a result of collision of train and car in Moscow killed one person. On the stretch of Moscow — Krasnoarmeysk the driver of the passenger car tried to cross the road on forbidding signal of the traffic lights at controlled crossing. The accident killed the passenger of the car.