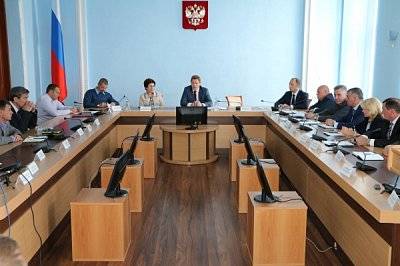 Dmitry Ovsyannikov at the round table

Acting Governor of Sevastopol Dmitry Ovsyannikov ready to participate in direct elections of the mayor in case of their carrying out, if at that time will reach success in this position. He said this in an interview with “the Ribbon.ru”.

“If I have anything to show in terms of positive results of his tenure as acting Governor, and I will understand that citizens support me, then I will participate,” — said the mayor.

He recalled that the stated willingness to participate in direct elections in the first days after his appointment in Sebastopol. “That was my original position, which I continue to follow”, — said Ovsyannikov.

On 18 October members of the Legislative Assembly of Sevastopol adopted in first reading a bill on direct elections of the Governor of the city. In case of approval the direct election of the mayor will take place in September 2017.

On the same day, former speaker of the legislative Assembly of Sevastopol Alexey Chaly said that it plans to participate in the elections if they take place.

The current Statute of Sevastopol involves the election of deputies of the Governor from three candidates proposed by the President. The introduction of direct elections had already been submitted to the legislature, however, has not found support. In particular, against the popular vote were made by the former head of the city Sergey meniailo, which Russian President Vladimir Putin in late July, appointed his envoy in the Siberian Federal district.

The head of state appointed Dmitry Ovsyannikov, who worked in the Ministry of industry and trade, to the position of acting Governor of Sevastopol.