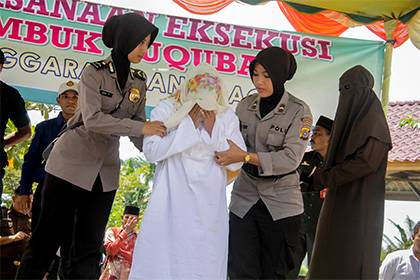 In the Indonesian province of Aceh 20-year-old girl publicly whipped with rods because she was standing too close to her boyfriend. On Monday, October 31, reports the Daily Mail.

As notes the edition, the girl accompanied by two women led to the courtyard in front of the mosque, put on his knees and gave her a public spanking. She received 23 blows with rods.

In March of this year in this province carved 18 people for gambling and drinking alcoholic beverages.

Aceh is the only province in Indonesia where Sharia laws. They were introduced in the period from 2005 to 2013 and formally apply not only to the local Muslims, but also to the residents of Aceh and other faiths as well as tourists. In the province banned the drinking of alcohol, sexual contact between a man and a woman, unmarried, a ban on public appearance with his head uncovered and the women wearing formfitting pants. Violators face a public flogging.